FREE Keep America Great Hat
President Trump says he is imposing new sanctions on Iran.
"We're moving forward with additional sanctions on Iran," the president said, speaking to reporters Saturday outside the White House. "Some of them are in place. As you know, we have about as strong a sanction grouping as you could possibly have on any country, but we're putting additional sanctions on."
He did not offer specifics on those sanctions but suggested sanctions could be lifted in the future.
"We're not going to have Iran have a nuclear weapon," Trump said. "And when they agree to that, they are going to have a wealthy country, they're going to be so happy, and I'm going to be their best friend."
Trump last year withdrew the U.S. from a deal brokered by President Obama that lifted sanctions on Iran in exchange for abandoning its nuclear weapons program. Since then, Trump has attempted to use an economic tactic called "maximum pressure" — in other words, reimposing sanctions. On Thursday, Iran hit a U.S. surveillance drone, days after the U.S. accused Iran of hitting two foreign-owned oil tankers traveling in the Strait of Hormuz.
In his comments, the president also defended his decision Thursday to cancel a strike on Iran after he says he learned the strike would kill 150 people. The strike was intended to retaliate for Iran shooting down the American drone, The New York Times first reported.
"I didn't like the idea of them knowingly shooting down an unmanned drone and then we kill 150 people," Trump elaborated Saturday."I don't want to kill 150 Iranians," he continued. 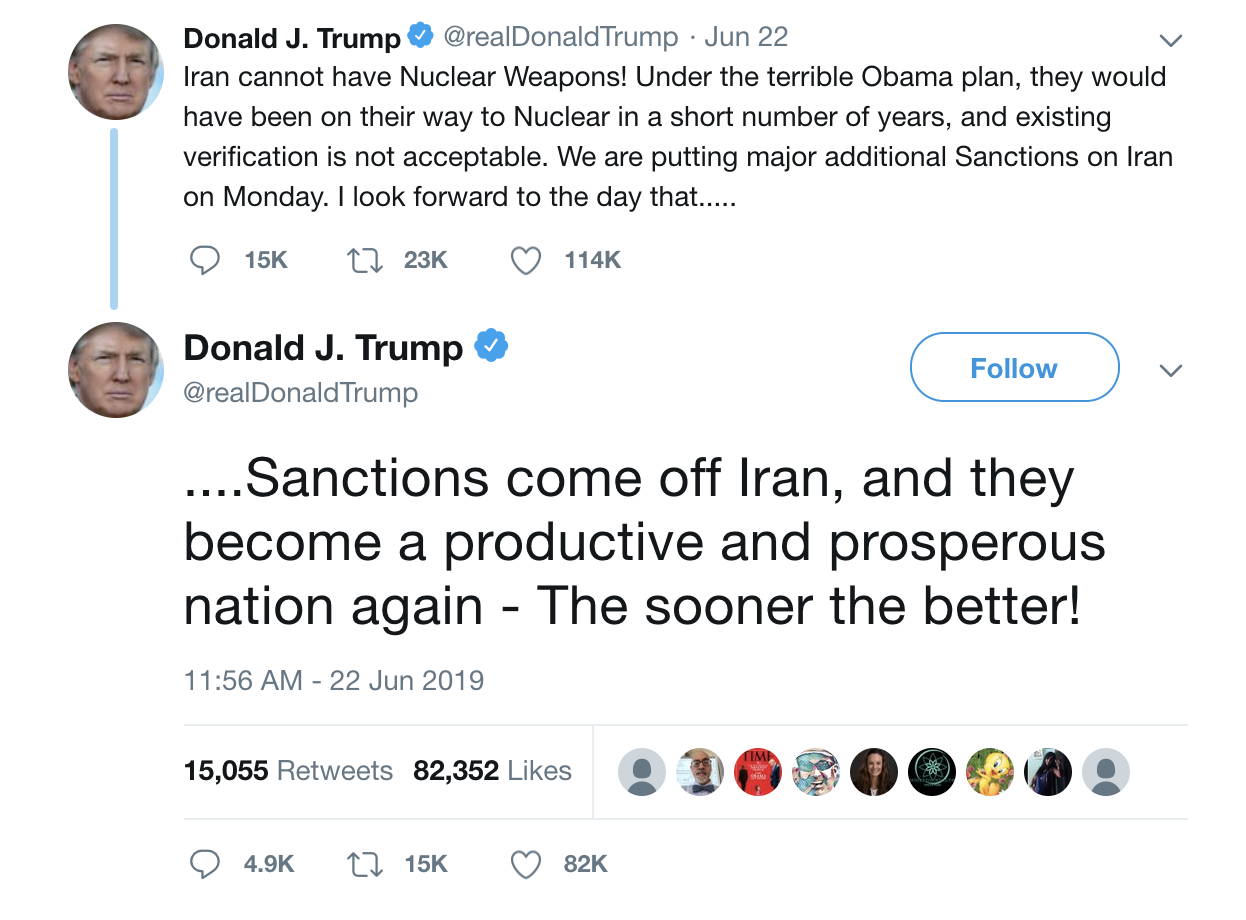 On Saturday, Trump tweeted that his decision to cancel the strike was not a reversal, but rather a move to halt the plan in that moment.

"I never called the strike against Iran "BACK," as people are incorrectly reporting, I just stopped it from going forward at this time!"

Karim Sadjadpour, a senior fellow at the Carnegie Endowment for International Peace, said Iran is suffering under soaring inflation, high unemployment, and the departure of educated citizens and capital.

"The Iranian economy is really deteriorating as a result of these sanctions, and I don't see how they're going to be able to reverse it absent some type of an eventual accommodation or negotiation with the United States,"

Sadjadpour told NPR's Scott Simon on Weekend Edition.Sadjadpour estimated that, "We will continue to see this escalatory cycle. It may be that Iran tries to wait out the Trump presidency, hoping that by November of 2020 a more moderate Democrat will be elected."

Congressional leaders have pushed for more input into U.S. strategy.

House Speaker Nancy Pelosi, D-Calif., said Friday that leading lawmakers had met with the president after they learned about his decision to initiate, then cancel, a strike on Iran.

"Democratic Leaders emphasized that hostilities must not be initiated without the approval of Congress," Pelosi said in a statement. "We have no illusions about the dangerous conduct of the Iranian regime. This is a dangerous, high-tension situation that requires a strong, smart and strategic approach."

Sen. Lindsey Graham, R-S.C., wrote that he appreciated the president's "desire to be measured and thoughtful when it comes to Iranian provocations." He said he hoped that if Iran follows through on its threat to restart nuclear enrichment, the U.S. "will make this a Red Line."

Trump told reporters Saturday that American oil and gas production is so large that the U.S. no longer depends on the Strait of Hormuz for oil transport. Secretary of State Mike Pompeo has said the U.S. will keep the shipping routes open in the Gulf of Oman, and Trump said that is mainly to the benefit of China, Japan, Indonesia and other countries.

"We're doing them a very big service by keeping the Straits open, but this is not about the Straits, this is about, Iran cannot have a nuclear weapon," Trump said.

Reporters asked the president whether he had confidence in his national security adviser, John Bolton. "Yeah, I do." Trump said. "Because I have John Bolton, who I would definitely say is a hawk, and I have other people that are on the other side of the equation, and ultimately I make the decisions, so it doesn't matter."

"John Bolton is a kind of bureaucratic tapeworm. Try as you might, you can't expel him," Carlson said. "His life really is Washington in a nutshell, blunder into obvious catastrophes again and again, refuse to admit blame and then demand more of the same."

Trump, however, said, "John Bolton is doing a good job." Trump also expanded on plans of U.S. Immigration and Customs Enforcement to arrest and deport thousands of migrant families across the country. 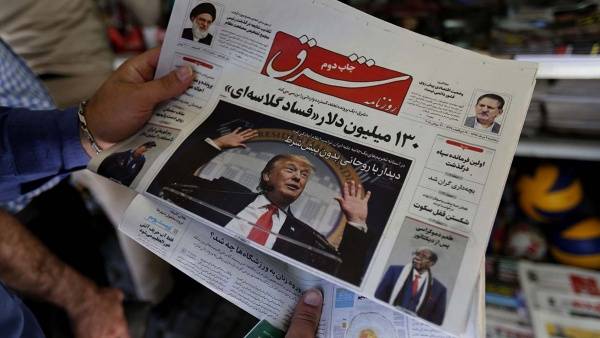 Later Saturday, the president announced via tweet that he would delay deportations by two weeks, "to see if the Democrats and Republicans can get together and work out a solution to the Asylum and Loophole problems at the Southern Border."

Earlier in June, Trump had threatened to impose tariffs unless Mexico agreed to tighten its border and reduce the flow of migrants crossing illegally into the U.S. NPR's Carrie Kahn reported that the mission will be difficult.

"Mexico has very limited resources," Kahn said. "And this new government has cut its budgets for the immigration and refugee programs under the president's new austerity program. So it's going to be tough to take even more asylum-seekers."

In response, Mexico agreed to deploy its National Guard and to keep more Central American migrants.

On another topic, the president on Saturday again rebuffed a claim by advice columnist E. Jean Carroll that Trump sexually assaulted her in a Bergdorf Goodman dressing room in the '90s."It's a totally false accusation," Trump said. "I have absolutely no idea who she is."

Original content can be located at National Public Radio 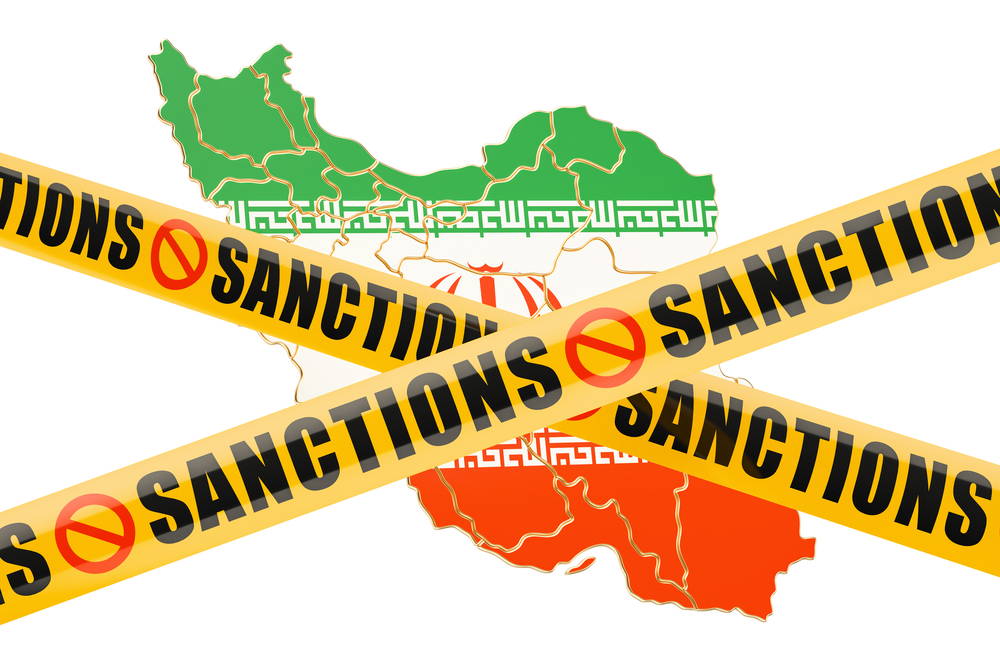