Trump Was Right Not to Sign the Christchurch Call

The pledge to eliminate extremist content online is antithetical to the American understanding of free expression.

Last week, the prime minister of New Zealand and president of France presented the Christchurch Call—a pledge to “eliminate terrorist and violent extremist content online.” Eighteen countries and all major tech companies signed up, but Donald Trump’s administration issued a statement declining to join them. Critics of the administration imputed the darkest of motives: It must oppose the pledge because it wants to make the world safe for violent extremists, perhaps especially the right-wing zealots who applauded the massacre of 51 people in Christchurch, New Zealand, itself two months ago.

You can read the Christchurch Call here. I defy you to find anything objectionable about it. It does not vilify particular religious or political beliefs; it mentions freedom of expression multiple times; it recognizes that terrorists will not disappear just because their Facebook accounts do or because their parents find out that they’ve been up to no good. Even the White House noted that “we support [its] overall goals,” and declined to say why the United States did not sign on. The office that issued the statement, the Office of Science and Technology Policy, referred me to the National Security Council, which did not offer any defense either.

So let me offer a defense for them.

The United States shares many values with France and New Zealand, but a common understanding of “freedom of expression” is not among them. And in their handling of terror threats, both countries have resorted to actions that are antithetical to the American understanding of the value of freedom of expression and would be flagrantly illegal under U.S. law. The Christchurch Call was written with deliberate, strategic vagueness, so that an expression like freedom of expression can be taken to mean whatever a signatory wishes it to mean. But that vagueness poses risks, and if there is any chance that signing on would make the U.S. seem to endorse a French or Kiwi version of free expression, we should stay away. 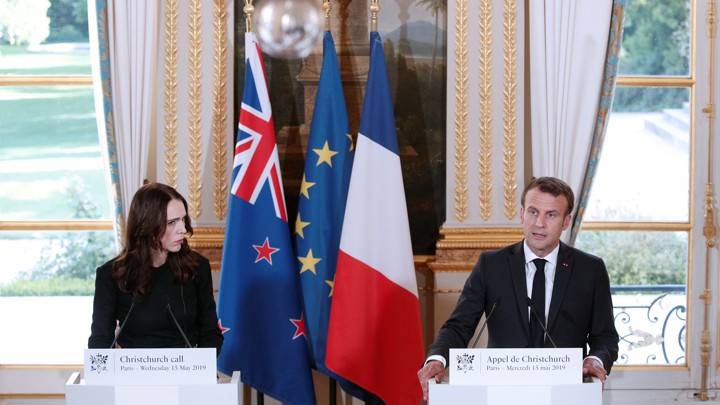 New Zealand has an Office of the Chief Censor. Take a look at his website; he often goes by his first name, which is Dave. Dave has the godlike ability to declare certain material “objectionable,” thereby making it illegal to produce, distribute, or watch—and he did just that after the murders in Christchurch. He classified as objectionable the live-video footage (an Islamic State–style commando raid against unarmed Muslims at prayer) and the killer’s manifesto, “The Great Replacement.” To read the manifesto for what he considers a “legitimate” reason—say, you are an academic who studies killers, or a journalist writing a story—you have to apply to Dave for permission and pay him NZ$102.20 (about U.S.$66) for his verdict.

France criminalizes not only the downloading of terror propaganda but the mere utterance of statements of approval for terror, which can land you in prison for seven years. Indeed, you need not even mention a terror attack: to say something nice about Osama bin Laden (“an epic beard”; “volleyball prodigy”) is, in the law, equal to saying something nice about terror. Penalties for these speech crimes grow if the speech is on the internet. In addition to imprisonment, a judge can make you pay 100,000 euros (about $112,000). Hundreds are convicted of this crime in France every year, according to Human Rights Watch, and 6 percent of those prosecuted are under the age of 14.

In the United States, you can watch terrorist videos, read their manifestos, and glorify their attacks all you like. The only price you will pay is total ostracism from the company of decent people. The protection guaranteed by the First Amendment, even in these days of hostility toward journalists by the Trump administration, extends comfortably over all of these sordid pastimes. In this near-absolute protection, the United States stands alone among nations—and given the constant calls, both internationally and domestically, to cut that freedom back, any suggestion that the United States should waver would be a sad concession.

This protection extends to the U.S. corporations that joined France and New Zealand in signing the Christchurch Call. Google, Facebook, Microsoft, and others also enjoy the absolute right to kick off any users they please, for almost any reason. It extends, too, to those corporations’ users and shareholders, who can say what they please about the corporations and stop surrendering their time and data to them if their sites become havens for the politically or religiously monstrous.

The best argument I have heard against the administration’s decision is from Farah Pandith, who worked for George W. Bush and Barack Obama and just published a book, How We Win, about countering violent extremism. “There are so many ways we have developed to push against terrorism—far more than criminalization of [extremist content],” she told me. “Being at the table for these conversations allow us to mold them as they go forward. By declaring that we’re not going to be there at all, we’ve blown any chance we’ve had.”

But the real value of the Christchurch Call was not government participation anyway. Governments already have programs to discourage terrorism, the most prominent of which is killing or capturing terrorists. The value was, instead, the participation of the social-media companies, whose policies’ influence online is at least as great as that of most governments. Anyone who watched the rise of ISIS five years ago will confirm that in those days, you could post just about anything, and major media companies would take weeks or longer to remove terrorist propaganda.

Now the life of an ISIS video is measured in fractions of a second. The companies have developed tools to identify and remove terror content—and they have done so not because of criminal prosecution in the United States, but because letting that content stand would have a devastating effect on their brand. I can’t find ISIS propaganda anymore, except in private groups on a platform called Telegram—and a big part of the activity on those groups is devoted to nothing more than telling members where to go if the group they’re in gets shut down, much to their (and let’s face it, my) annoyance. We’re making progress, and Dave has little to do with it.