Congressional Republicans, members of their staffs and conservative activists regularly flew first class to Saipan, an island just north of Guam in the Pacific Ocean. They slept at the beachfront Hyatt Regency, and dined on fresh Japanese cuisine.

The junkets in the late 1990s were organized by Patrick Pizzella. The Northern Mariana Islands, a commonwealth of the United States, had hired him to ensure that Congress did not impose federal minimum wage and immigration laws in a place where some workers earned less than $1 an hour.

Mr. Pizzella, a genial lobbyist and government official who has spent years advocating the interests of businesses, is set to become the top Trump administration official protecting workers’ rights when he takes over as acting labor secretary this week. He will fill the vacancy left when Alex Acosta resigned amid criticism of a plea deal he approved in 2008 with Jeffrey Epstein, the financier who has been accused of sex trafficking.

His appointment is far more consequential than those of the many acting secretaries who have served in President Trump’s patchwork cabinet. The man he succeeds, Mr. Acosta, spent two years battling other White House officials who demanded that he push through a sweeping anti-union agenda and coordinate his actions with the president’s political team.

Mr. Pizzella, who is close to many of the conservatives allied with Mr. Trump’s acting chief of staff, Mick Mulvaney, and on Vice President Mike Pence’s staff, is expected to be a significantly more cooperative partner in those efforts, according to administration and industry officials.

“Pat will be great — he is a movement conservative,” said Marc Short, Mr. Pence’s chief of staff and a friend of Mr. Pizzella’s for two decades. “I think it’s fair to say that while he will be focused on issues of workplace safety, he will also work to ensure that the workplace is not overly burdened with regulations.”When he filled the lone Republican slot at the Federal Labor Relations Authority during the Obama administration, Mr. Pizzella compared union representatives to the mob-connected bosses from the Marlon Brando film “On the Waterfront.”

He cheered a federal-court decision that struck down potential restrictions on investigating unions. As a Labor Department official during President George W. Bush’s administration in 2008, he bemoaned the “staggering costs” of paid work time that government employees used to conduct union business, which is authorized by labor law and union contracts.

Mr. Trump has sent mixed messages about his stance on organized labor. He has courted construction and law enforcement unions while taking a harder line against most government employees. But the conservatives who run his West Wing policy shop are less ambivalent, pushing hard to undermine unions’ ability to bargain collectively, raise dues and exert political power.
Those ambitions suffered when Mr. Trump’s first choice for labor secretary, the fast food executive Andrew Puzder, withdrew his nomination early in 2017 amid controversy over domestic abuse allegations. The administration turned instead to Mr. Acosta, a relatively moderate former prosecutor, who essentially inherited Mr. Pizzella as a deputy secretary already slated to work for Mr. Puzder.
Soon after Mr. Acosta took office, his aides were presented with a detailed to-do list by James Sherk, who coordinates labor policy for the White House’s Domestic Policy Council and joined the administration from the conservative Heritage Foundation.The list, which was provided to The New York Times by a person who had obtained it from a former Trump administration official, included proposals to weaken collective bargaining rights and protections for workers on federally funded construction projects.
The list also included a proposal that would have forced male actors in pornographic films to wear condoms.Mr. Acosta rejected outright or dragged his feet on many of the plans, including the condom regulation, according to a person close to him and administration officials.“We’re the Department of Labor, we’re not the Department of Commerce,” the secretary complained privately last year, the person close to him recalled.Mr. Sherk gained a powerful new ally when Mr. Trump named Mr. Mulvaney acting chief of staff in January.
Still, Mr. Acosta insisted that pursuing such a hard-line agenda would alienate the president’s blue-collar union supporters and make it more difficult to garner labor support for a new version of the North American Free Trade Agreement that is awaiting a vote by the Democratic-controlled House, according to a current administration official with direct knowledge of the situation.
Mr. Acosta also resisted efforts to involve the Labor Department in broader political fights. In April, the White House sent Mr. Acosta’s office a request from Kellyanne Conway, a counselor to the president, and other White House officials asking him to write an opinion column saying that a so-called Medicare-for-all proposal by Senator Bernie Sanders of Vermont would hurt employers and workers, according to a copy of the request viewed by The Times.
Mr. Acosta refused after his legal advisers determined that the request raised “red flags” related to the Hatch Act, a federal law that prohibits the use of government resources for political activity, according to memos provided by a former administration official.
“It should be expected that the White House and cabinet agencies, including the Department of Labor, would have frequent conversations around potential policy ideas particularly as it relates to the president’s priority of deregulation,” said Judd Deere, a White House spokesman. 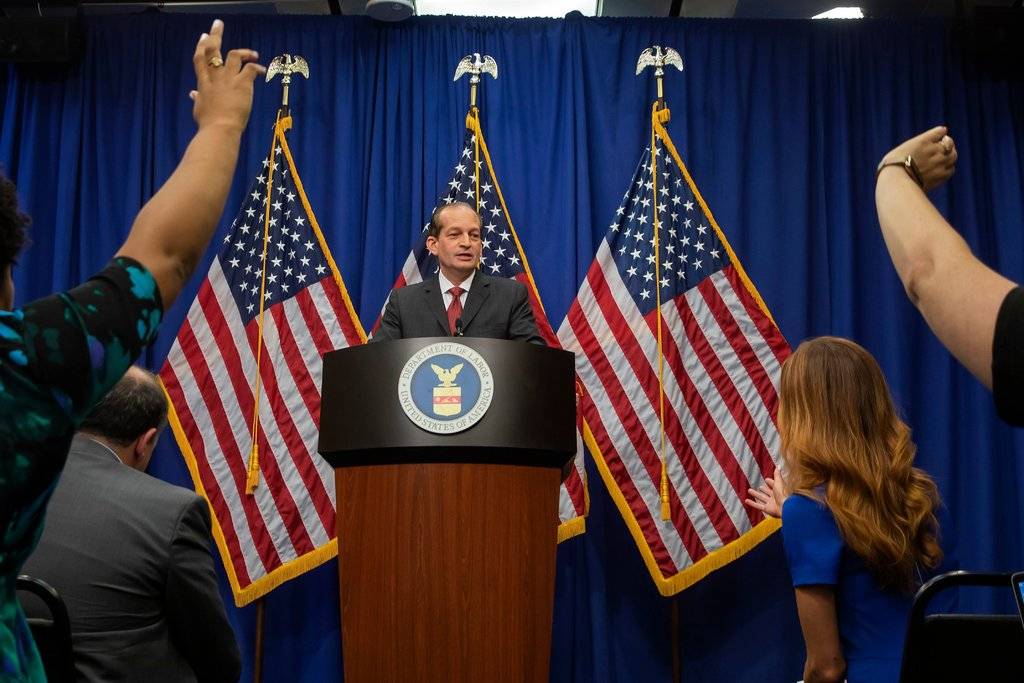 Alex Acosta, the secretary of labor, defended a plea deal he reached with Jeffrey Epstein in 2008 during a news conference last week.CreditErik S Lesser/EPA, via Shutterstock

As an undergraduate student at the University of South Carolina, he wrote columns for the school newspaper, including one in 1972 in which he criticized Senator George McGovern, the recently defeated Democratic presidential nominee, for sending his daughter to an upscale suburban school near Washington.

“The hypocrisy continues as McGovern expresses the opinion that he represents the working man,” Mr. Pizzella wrote. “That’s similar to Hitler saying he represented the Jewish people in Germany during the 1930s.”

After college, Mr. Pizzella went on to work for Ronald Reagan in the 1976 Republican primaries, according to a 2001 profile in The New Republic. He subsequently held a series of government appointments, building a formidable list of conservative contacts.

In the mid-1990s, Mr. Pizzella joined the lobbying arm of the law firm Preston Gates, where Jack Abramoff, who was later convicted of defrauding clients, had set up a growing lobbying practice. One of the firm’s biggest clients in the late 1990s was the Northern Mariana Islands, which was exempt from federal minimum wage and immigration laws but could sell products under a “Made in the U.S.A.” label.

Large textile manufacturers set up production on the islands. Migrant workers, typically from China and the Philippines, worked long hours for low pay and lived in squalid, crowded dormitories. A 1997 federal government report concluded that nearly the entire private-sector labor force of the commonwealth consisted of “essentially indentured alien workers.”

The report said that foreign women were often coerced into prostitution, and that those who refused were sometimes raped or tortured.

It was Mr. Pizzella’s job to present a kinder, gentler image of the commonwealth to Republicans in Congress and their staffs, who controlled the House and Senate at the time. Allen Stayman, an Interior Department official involved in investigating conditions on the islands, said Mr. Pizzella “was in charge of showing the Potemkin village.”

One person on a trip to the commonwealth organized by Mr. Pizzella recalled meetings with senior officials of the local government in which the officials discussed their interest in making the commonwealth a laboratory for conservative policies like school vouchers. Mr. Pizzella also showed visitors factories and dormitories that were crowded but clean.

The lobbying efforts were effective. Legislation that would have applied the minimum wage and immigration laws to the commonwealth went nowhere in the House in the 1990s. At his 2017 confirmation hearings to become deputy labor secretary, Mr. Pizzella dismissed the reported abuses as “allegations” and said his job was strictly to lobby against the minimum wage.

Original post can be located at THE NEW YORK TIMES