Tanks, flyovers and fireworks: What to know about Trump's July 4th extravaganza

President Trump is throwing a Fourth of July celebration that he's promising will be "like no other." Enamored of military processions like the annual Bastille Day parade in France, Mr. Trump has sought to incorporate military hardware into U.S. Independence Day observances in Washington, too.
On Thursday, U.S. Army tanks will be in the city, and Mr. Trump will deliver a July 4th speech at the Lincoln Memorial, which is unusual for an American president.
The president's critics have chastised him for demanding the kind of costly military parades associated with authoritarian regimes and for placing himself center stage during a typically nonpartisan celebration.
The White House is reportedly providing VIP tickets to Republican Party donors, raising concerns from some Democratic lawmakers that the nation's birthday is being politicized.
Asked if she can be sure the campaign won't use the event in any fundraising emails or campaign imagery, Trump campaign press secretary Kayleigh McEnany demurred, saying, "I can assure you we will act within the legal limits of what we're allowed to do."Mr. Trump so far has observed Independence Day as a salute to America's military might.
"Big 4th of July in D.C. 'Salute to America.' The Pentagon & our great Military Leaders are thrilled to be doing this & showing to the American people, among other things, the strongest and most advanced Military anywhere in the World. Incredible Flyovers & biggest ever Fireworks!" the president tweeted Tuesday morning.
Mr. Trump confirmed to reporters Monday there will be tanks "stationed outside," too."You've got to be pretty careful with the tanks because the roads have a tendency not to like to carry heavy tanks," he told reporters Monday.
What the Pentagon says
While the president hoped to see Army tanks rolling down the streets of Washington, the Pentagon had other ideas. A Defense Department official told CBS Tuesday that the tanks being featured will be on "static display" near the Lincoln Memorial, almost certainly placed on flatbeds, instead of tearing up city streets with their treads.

In 2018, the Pentagon issued a memo recommending against the president's original plans to have military tanks driving down historic pathways in Washington as part of a planned Veterans Day parade. That plan was scrapped after reports put the cost of the military extravaganza at a whopping $92 million — over three times the maximum initial White House estimate.

The memo cautioned that "consideration must be given to minimize damage to local infrastructure."

Traditionally, the Pentagon does not get involved in events that seem to have a political agenda. But critics argue that with the use of tanks and air power, the military "salute" to America's heroes may be evolving into a salute to President Trump.

The event effectively marks the first military parade since the end of the first Gulf War in 1991.CBS News' David Martin reports among those participating in the flyover are: Navy - 2 Super Hornet F-18s plus two F-35Cs (the carrier version coming all the way from LeMoore, California) as well as:

Pentagon sources tell CBS News that Marine One, Air Force One and the Blue Angels are expected to be participating as well.

What about those tanks

According to the president, the military parade will feature "brand new Sherman tanks" and "brand new Abram tanks" during the salute. Sherman tanks, however, went out of service in 1957.

Associated Press photographers spotted at least two M1A1 Abrams tanks and two Bradley Fighting Vehicles on flatcars in an area rail yard in the District on Tuesday, in advance of the show. 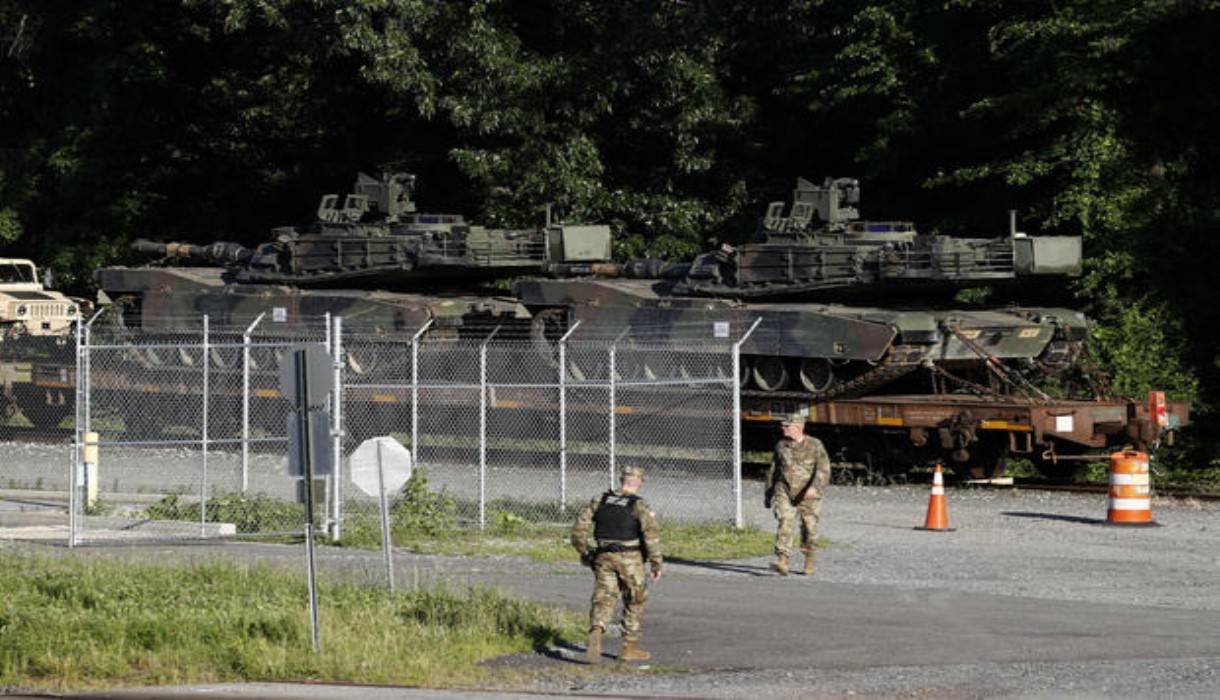 Military police walk near Abrams tanks on a flat car in a rail yard, Monday, July 1, 2019, in Washington, ahead of a Fourth of July celebration that President Donald Trump says will include military hardware.

The Abrams tanks weigh more than 60 tons each and were shipped on railroad freight cars, from Fort Stewart, Georgia, the nearest Army base that has them, according to the Associated Press. The Abrams tanks were being refurbished in Lima, Ohio, at a plant that had been at risk for closure but remained online because of the administration's investments in defense spending.

In 1990, Abrams commissioned new modernized versions of the M1A1 model, with technological improvements of the basic tank design. Outwardly similar in appearance, the M1A2 includes radically advanced technology that allows tankers to locate and plot enemy positions without deploying backup vehicle crews. The heavy military machine can hit a maximum speed of 42 mph with range of 265 miles and armament made up of a 120 mm XM256 Smooth Bore Cannon; a 7.62 M240 coaxial Machine gun; and a .50 caliber M2 Machine gun

It's going to slow traffic and temporarily stop flights

The festivities are likely to slow down holiday travelers on the streets around Washington.Road closures are sure to snarl traffic in D.C, and the Federal Aviation Administration (FAA) told CBS News' Kris Van Cleave that flight operations at the the high-traffic Ronald Reagan National Airport will shut down for roughly two hours Thursday night (6:15 p.m. to 7:45 p.m. and again from 9:15 p.m. to 9:45 p.m.).

According to the president, the big 4th of July "Salute to America" will include military flyovers and the "biggest ever fireworks." Typically, the District's fireworks display on the National Mall is open to the public, with thousands flocking to the nation's capitol for the show and concert from 8 p.m. to 9:30 p.m.

The president's "Salute to America," which is scheduled to take place between 6:30 p.m. and 7:30 p.m., will include a large area from the Lincoln Memorial extending to the reflecting pool, about 1500 feet, that will be reserved for ticketed VIP guests, including Trump family, friends and administration officials.

Here's what else is expected

The U.S. Secret Service tells CBS that the "Salute to America" event specifically will be secured by the U.S. Secret Service, separate from the rest of the July 4th activities within DC. Attendees will be required to undergo an additional level of security screening to include magnetometers.

The National Park Service is reportedly diverting nearly $2.5 million, originally intended for parks across the country, for the celebration.

What Trump will say

The White House has yet to release any excerpts of the president's speech, and it's unclear if it will. Sometimes, the president follows a teleprompter, and sometimes he prefers to speak off-the-cuff — particularly when he's in front of a supportive crowd.Mr. Trump claimed he thinks he can speak to all Americans, before a moment later attacking Democrats over health care and taxes.

Counselor to the president Kellyanne Conway wouldn't divulge what the president might say, but did outline to reporters Tuesday the themes he will address.

"Thematically, how wonderful this country is," Conway said, asked what themes Mr. Trump would discuss. "Our troops and military. Our great democracy. And great call to patriotism. The great success of this administration in opening up so many jobs for individuals, what we've done for veterans. There's no final form yet. But America will hear the whole speech."