President Trump: ‘Time to Get Back Business’ After ‘Costly and Time Consuming Investigations’

President Trump posted a series of Twitter statements on May 2, suggesting that it is time that the nation move on from the Mueller investigation, calling on Republicans and Democrats to “come together for the good of the American people.”

President Trump posted a series of Twitter statements on May 2, suggesting that it is time that the nation move on from the Mueller investigation, calling on Republicans and Democrats to “come together for the good of the American people.”
Trump stated that “it’s time to get back to business” after “each party trying their best to make the other party look as bad as possible” pleading for “no more costly and time consuming investigations.” 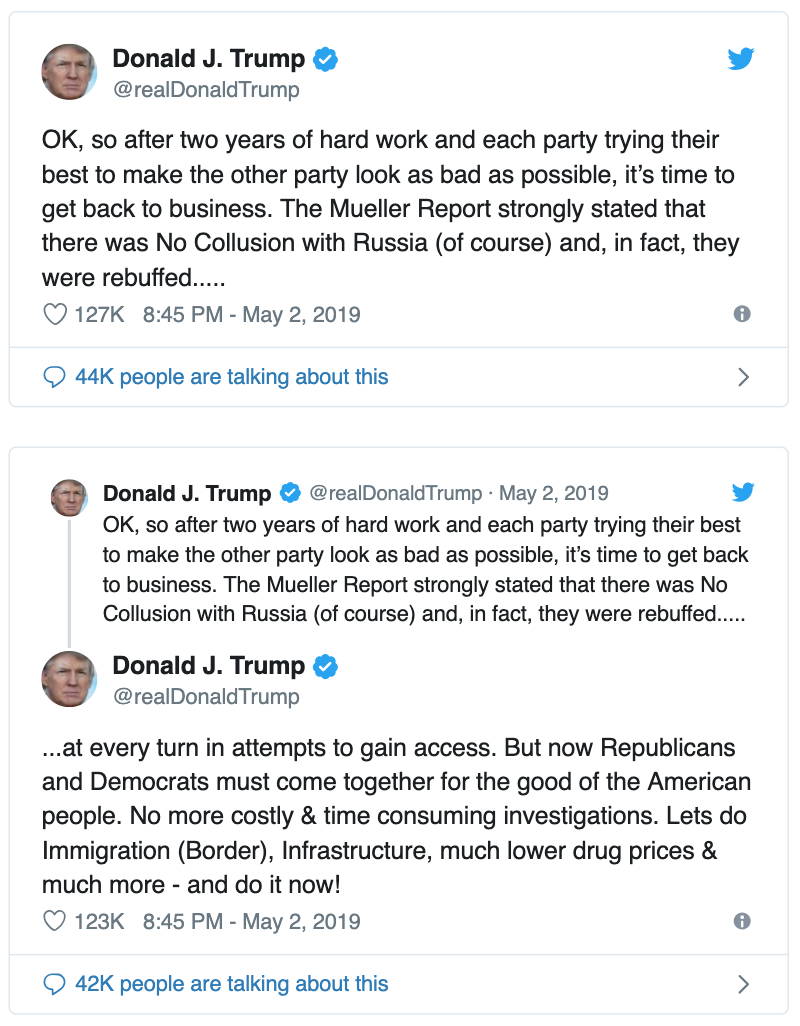 Now, Trump is pushing Congress to finally focus and prioritize on what that the public actually cares about, including immigration issues and border security, investing in infrastructure reform, and pushing down prices on prescription drugs. Earlier this week, Trump met at the White House with Congressional Democrats to discuss negotiations on investment in infrastructure.

Last week, the president and first lady attended the Rx Drug Abuse and Heroin Summit, where Trump talked about the administration’s efforts to deal with the opioid epidemic as well as cracking down on the flow of narco trafficking across the U.S. southern border. This issue of illegal immigration and border security has become particularly more polarizing, ever since Trump voiced concerns about its impacts on the country while on the campaign trail. The recent longest-ever government shutdown from December 2018 to January 2019, was due in part to the inability of both parties in Congress to agree on funding for border security and reach a solution on immigration reform.

Trump posted the above statements following an interview with Fox News correspondent Catherine Herridge, during which Trump talked about his Attorney General’s testimony before the Senate, stating that the administration has acted in “total transparency” during the Mueller investigation as well other probes in Congress. Trump, therefore insisted that Congressional Democrats stop engaging in investigating him or his administration, declaring: “It’s done” reported Fox News.

The President’s statement is significant as it comes with a fresh restart to his administration, after the end of the 22-month long Russia investigation. Trump reiterated the conclusions of the Mueller report, saying it “strongly stated that there was No Collusion with Russia (of course) and, in fact, they were rebuffed … at every turn in attempts to gain access.”

This statement was also made almost 2 years since the Mueller investigation was launched on May 17, 2017, and almost exactly 3 years since Trump secured the Republication nomination on May 3, 2016. During that time three years ago, the focus was first and foremost on Trump’s agenda and there was no press coverage on Russian interference. Most experts believed that Trump had no chance in the general election.